What is Medicare Part D?

Notice your Traditional Medicare Card  only includes Part A + Part B. It does NOT include Part D. You will need to pick this up with a Private Insurance Carrier in order to stay compliant with the federal law and avoid a late enrollment penalty.

What does Medicare Part D cover?

Each plan that offers prescription drug coverage through Medicare Part D must give at least a standard level of coverage set by Medicare. Plans can vary the list of prescription drugs they cover (called a formulary) and how they place drugs into different “tiers” on their formularies. Formularies can vary from plan to plan, so be sure to request a copy.

How Much Does it Cost?

Part D cost rates vary depending on where you live. In general, you can find Part D plans starting at $14.00 + per month.

You generally have co-pays associated with Part D depending on what Tier Level your medication is on plus a deductible.

Is there a deductible for Part D?

There may be a deductible for your Part D plan. It varies from plan to plan. This deductible would have to be met first then your co-pays would go into effect.

What do the tiers on my Part D mean?

In some cases, if your drug is in a higher (more expensive) tier and your prescriber thinks you need that drug instead of a similar drug on a lower tier, you can file an exception and ask your plan for a lower copayment. Remember, this is only an example—your drug plan’s tiers may be different.

What is a formulary?

Formulary – Most Medicare drug plans (Medicare Prescription Drug Plans and Medicare Advantage Plans with prescription drug coverage) have their own list of what drugs are covered, called a formulary. Plans include both brand-name prescription drugs and generic drug coverage. The formulary includes at least 2 drugs in the most commonly prescribed categories and classes. This helps make sure that people with different medical conditions can get the prescription drugs they need. All Medicare drug plans generally must cover at least 2 drugs per drug category, but plans can choose which drugs covered by Part D they will offer.

The formulary might not include your specific drug. However, in most cases, a similar drug should be available. If you or your prescriber (your doctor or other health care provider who’s legally allowed to write prescriptions) believes none of the drugs on your plan’s formulary will work for your condition, you can ask for an exception.

What is the Coverage Gap/Donut Hole?

Most Medicare drug plans have a coverage gap (also called the “donut hole”). This means there’s a temporary limit on what the drug plan will cover for drugs.

Enter your email to discover the 6 questions to ask to make sure you don’t get on the wrong plan that doesn’t meet your needs. 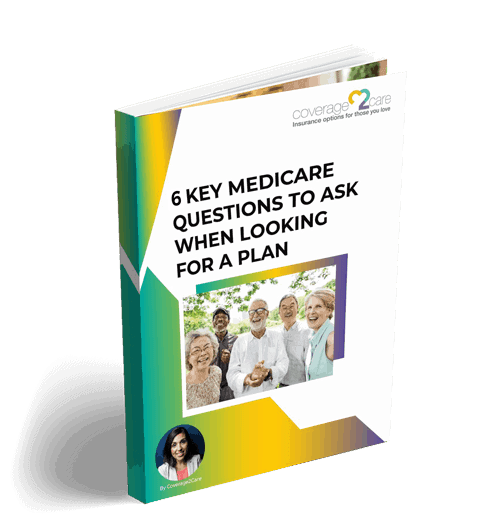 Most Texas senior citizens are confused about their medicare coverage options. Coverage2Care can help you find a medicare plan that you feel confident about.

We're Here To Help You

Enter Your Info to Get Instant Access to the Guide